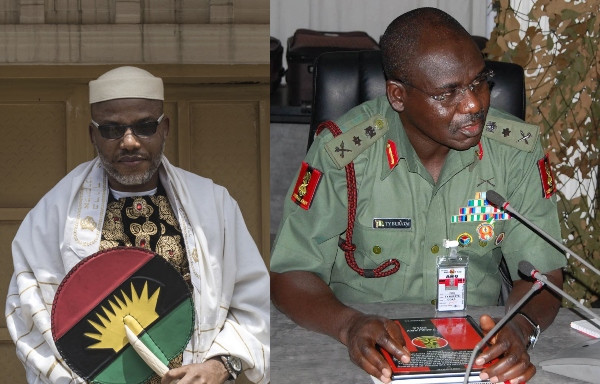 Sequel to the alleged attack on the former deputy senate president, Senator Ike Ekweremadu, Mazi Nnamdi Kanu, the leader of the Indigenous People of Biafra (IPOB) on Sunday August 18, offered a N1 million bounty for information on the travel plan of Southeast governors overseas.

During his 87 minutes broadcast which centered on the attack on Senator Ike Ekweremadu in Germany by members of IPOB, Nnamdi Kanu warned all Igbo political leaders not to travel out of the country for their own good. Senator Enyinnaya Abaribe was however exempted from the warning.

“So if you are working in any Government House in Southeast and you know which city in the world your governor is going to be, inform us so that we will mobilise for him and you will be rewarded with N1 million” he said.

The IPOB leader stated that they hold a grudge against Governors and the former Deputy Senate President for aiding the proscription of the group.  Also accusing the Enugu West Senator of backing the suspended RUGA policy of the federal government, Nnamdi alleged that Ekweremadu embezzled money budgeted for construction of Enugu-Porthacourt Expressway by former President Goodluck Jonathan’s administration, a claim which is however unconfirmed.

“They and not the Federal Government of Nigerian proscribed IPOB,” said Mr Kanu.

“They said they proscribed IPOB to douse rising tension in the region. What caused the tension, because the military raided my house in Umuahia.

“They also brought the army to raid my house in Umuahia. How many times has he spoken against the killings and kidnappings happening in his own state?” queried Mr Kanu.

“He went to celebrate New Yam Festival in Germany when his people are being killed and our women being raped. Where did they get the new yam because there is none in Igboland since all the farmlands have been destroyed by herdmen”.

Ohaneze Ndigbo President-General, John Nwodo and Chief of Army Staff, Tukur Buratai, have also been placed on IPOB’s overseas watchlist. Stating that the group will never forgive Buratai over killings and atrocities allegedly committed by the military in the southeast, the separatist leader accused Nwodo of saying that Igbo youths were responsible for the killings and kidnappings in the region. He also praised Senator Abaribe and Femi Fani-Kayode for being honest in their dealings.

“We have nominated five persons each in every country or the world who are ready to be arrested and be jailed for this purpose. Many of us have been killed so what is there in going to jail”, he said.

“We campaigned for Abaribe’s re-election because he always spoke the truth everytime about what is happening in the country and today he is the highest political office holder in Igboland.

“Fani Kayode is not an Igbo man but he always stands for the truth and so we have enormous respect for him” he added.