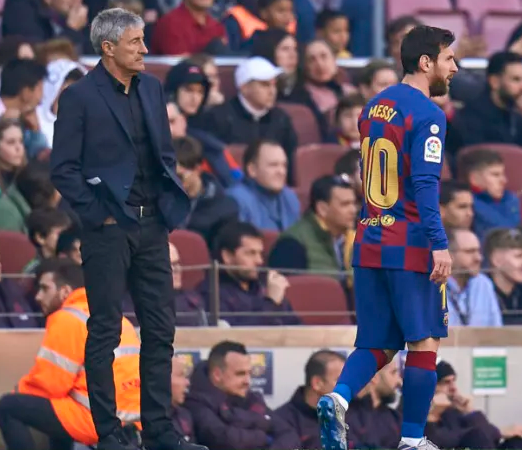 Barcelona coach, Quique Setien has hit back at Lionel Messi while defending his tactical philosophy after the superstar footballer said they can’t win Champions League playing in his style.

In a recent interview with Sport, the Argentinian star said: ‘It is not possible to win it by playing as we have been playing. My opinion is based on the fact that I was lucky to play the Champions League every year.’

Reacting to Lionel Messi’s comment about his style, Setien who took over from Ernesto Valverde in January and hoping to deliever Barca’s first Champions League since 2015 said: ‘Messi’s words I think have created a big debate.’

‘We can win it. We are convinced we can win the Champions League, of course we can,’ Setien told beIN Sports.

Lionel Messi and his teammates suffered three consecutive quarter-final defeats before Liverpool inflicted another major blow last term. In the semi-final first leg, Barca defeated Liverpool 3 -0 at Nou Camp, but in the second leg at Anfield, Liverpool produced one of the greatest comebacks as they hit Barca 4 – 0 without a reply.

The win for Liverpool, ended the Real Madrid’s dominance in 2019 after they had won three-straight Champions League titles after the Catalans’ 2015 triumph.