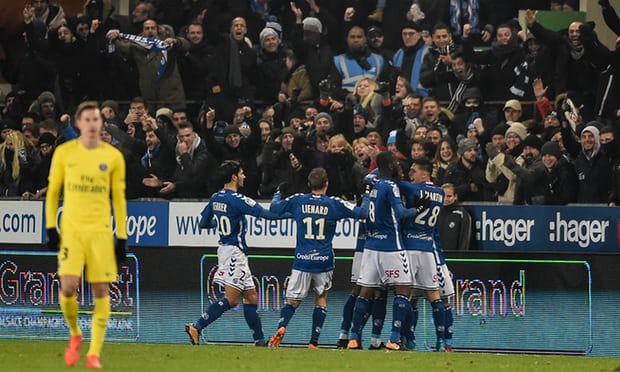 Paris Saint-Germain conceded their first defeat in 22 games in all competitions since signing Neymar this summer by losing 2-1 at Strasbourg on Saturday.

Ligue 2 champions last season’overcame the multi-millionaires from the French capital all thanks to goals from Nuno Da Costa and Stephane Bahoken at La Meinau, where more than 25,000 spectators and fans witnessed the title favourites crumble.

Since Neymar joined PSG from Barcelona with a record signing, PSG had won 13 games with two draws in league play to go with a perfect record in the Champions League and the French Super Cup triumph over Monaco, but Saturday’s result came unexpectedly.

With a 13th-minute opener, Nuno Da Costa stunned the visitors by getting in behind their defence to nod home a free kick swung across from the left by Dimitri Lienard.

Kylian Mbappe pressed for an equaliser in the 42nd minute, the teenage striker meeting a driven cross from the left by Adrien Rabiot at the near post and gave Strasbourg goalkeeper Bingourou Kamara no chance at all.

But Strasbourg scored again in the 65th minute when Bahoken burst through the middle to beat Alphonse Areola with a thumping strike high into the net.

Home shot-stopper Kamara had to be replaced due to injury with 20 minutes remaining, as Alexandre Oukidja came on in his place, and moments later the league’s leading scorer Edinson Cavani stepped off the bench as PSG chased an equaliser.

Pressure was intensely applied to the Strasbourg goal, with nine minutes of stoppage time giving them even greater hope of a leveller to even the scores.

But Neymar was booked as frustration in the PSG ranks grew, with Strasbourg clinching a breath-taking win.