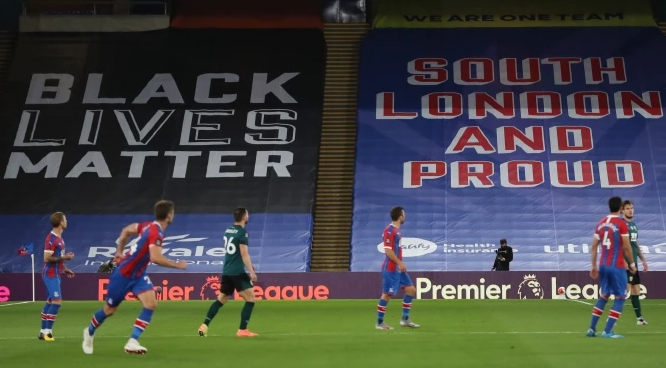 London club, Crystal Palace, have become the first Premier League club to distance themselves from the Black Lives Matter (BLM) UK movement amid controversy being generated by the UK arm of the movement.

Recently, there has been a growing backlash against the aims of the movement ever since the movement gained more popularity following the deaths of George Floyd.

BLM leaders have posted their beliefs in defunding the police, overthrowing capitalism and “targeted sanctions in line with international law against Israel’s colonial, apartheid regime”.

This week BLM was accused of “spreading hate” after pledging support for Palestine amid Israel’s plans to annex the West Bank.

The UK arm of the BLM movement put out tweets on the Israeli-Palestinian conflict after hearing of plans by the Israeli government to annex Israeli settlements on Palestinian occupied West Bank.

The BLM UK account wrote: “As Israel moves forward with the annexation of the West Bank, and mainstream British politics is gagged of the right to critique Zionism, and Israel’s settler colonial pursuits, we loudly and clearly stand beside our Palestinian comrades. FREE PALESTINE.”

The BLM banner has been on display at Selhurst Park during Premier League games and while Crystal Palace insisted they back the “ethos” of the cause, they have issued a statement urging people to adopt the anti-discrimination message and not the wider demands of the movement.

Even the BBC have reportedly told presenters not to wear the badge after the campaign was accused of “hijacking” George Floyd’s death for it’s own selfish political reasons.

In a statement today, Palace said: “As people will have seen from our first home game, we have placed banners over our seated areas at Selhurst Park that read: BLACK LIVES MATTER.

“We stand proudly alongside members of the BAME community, our players and employees, and behind the ideals and ethos of ‘black lives matter’.

“However, we would like to make clear that we do not endorse any pressure group or body that carries the same term in its name, and we strongly believe that organisations should not use this important force for change and positivity to push their own political agendas.

“We want to be part of a world that is fair, inclusive and open to all.

“As an organisation, we recognise that we need to do more, and we will do more to contribute towards this goal.